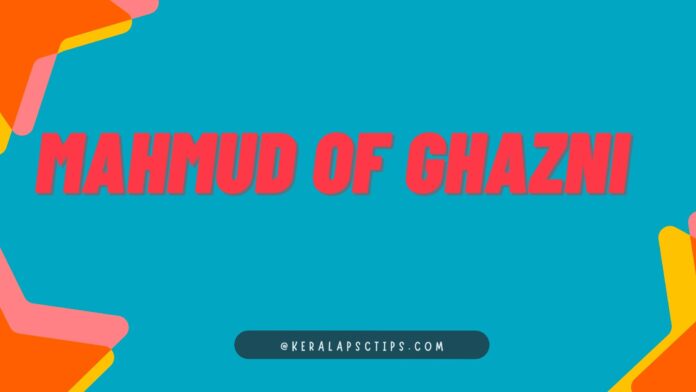 1. Who was the father of Mahmud Ghaznavi?

2. During Mahmud expedition of invasion, who got first defeat in Peshawar?

4. Who was the ruler of Gujarat when Mahmud invaded the Somnath temple?

5. Which invasion of Mahmud appreciated by Caliph and called Mahmud as Star       of Islamic World?

6.  Which invasion of Mahmud made furious on Pratihara’s ruler Rajyapala?

Ans:  When Rajyapala surrenders to the Mahmud

7.  Who was the ruler of Multan at the time of Mahmud invasion?

8. Who had given Mahmud an investiture to rule as an independent ruler?

9. Who among the following ruler commit suicide after battle with Mahmud?

10. What was the religion of Mahmud of Ghazni?

12. How many children did Mahmud of Ghazni have?

14. What was the name of his last child?

15. At what age did Mahmud of Ghazni die?

16. Who was his successor after his demise?

17. Mahmud of Ghazni was the most prominent ruler of what empire?

19. Aftermath of the battle: winner and loser

Obviously, the clear winner was Mahmud Ghazni. It is said that he always attacked India during the hot summer seasons and with the onset of monsoons, would go back to Ghazni, the reason being, he wanted to avoid the flooding rivers of Punjab, so that his forces won’t get trapped there. In all his 17 invasions, a number of dynasties were conquered by him.

20. Rise to Power and Claiming the New Authority of ‘Sultan’

Mahmud of Ghazni was born in AD 971 in the town of Ghazni, Khorasan (which is today in the south-eastern part of Afghanistan). His father, Abu Mansur Sabuktegin, was a Mamluk warrior slave of Turkic origin, and the founder of the Ghaznavid Empire. In AD 977, Sabuktegin succeeded his father-in-law, Alptigin, as the governor of Ghazna. Like his predecessor, Sabuktegin recognised the nominal authority of the Samanid Empire over his domains. This, however, would change when his son Mahmud came to power.