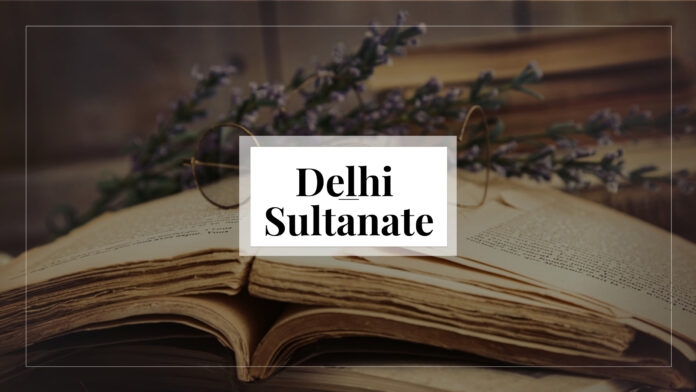 The defeat of Prithviraj Chauhan in the second battle of Tarain in 1192 by Shahabuddin Muhammad Ghori inaugurated an era of Muslim rule in India. The sudden death of Muhammad Ghori in 1206 and his failure to specify succession procedures pitted his three slaves Tajuddin Yalduz, Nasiruddin Qubacha and Qutbuddin Aibek against each other.

The period between 1206 and 1526 in the Indian history is known as the “Period of the Sultan Rulers” . During this period, rulers belonging to five different dynasties- The Slaves, the Khiljis, the Tughlaqs, the Sayyids and the Lodhis-ruled over India.

The Background of Delhi Sultanate

Important Rulers and Points to Remember

1.Jalal-ud-din’s policy of ……….was not liked by the young Khiljis

3.The most successful ruler among the slave kings was ……..

4.The construction of Qutb Minar was started by ……….

5.The first Sultan to invade South India was ……………

8.Babur the ruler of Kabul was invited by …………..to invade India.

9.The first Turkish ruler to introduce Arabic coinage was ………

10. What does the term Mameluq signifies?

11. Who among the following ruler from the Ilbary dynasty died of injuries while playing Chaugan (Polo) at Lahore?

12. Which of the following literary work primarily dealing with Aibak?

13. Which ruler from the Delhi Sultanate saved Sultante from Changez Khan’s attack by refusing to give any shelter to Jalal-ud-din?

14. What do you mean by Turkan-i-Chahalgani?

15. Who among the following known as the “slave of a slave”?

16. Which of following Sultan of Delhi Sultanate to issue regular currency and to declare Delhi as the capital of his empire?

17. Which of the following is not correctly matched?

18.Assertion (A): Iltutmish introduced reforms in civil administration and army which was now centrally paid.

Reason (R): Iltutmish was the first Sultan to recognise the economic importance of Gangetic basin

19.  Who among the following Sultan of Delhi Sultanate adopted a policy of blood and iron?

20.Who was the first Muslim invade India ?

22.Who built the ‘Alai Darwaja’ and Siri Fort ?

23.Which of the following rulers of Delhi Sultanate abolished the Iqtas ?

24.Which of the following sultans of Delhi Sultanate established a Famine Code to relieve the victims of Famine ?

25.Who was the first sultan to set up a permanent standing army of Delhi Sultanate ?